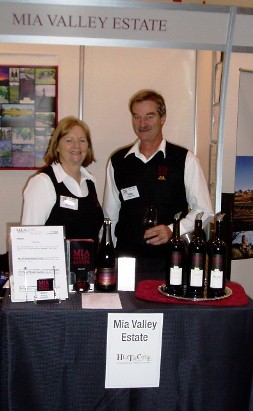 Our property consists of 100 acres of softly undulating land sloping towards the Mia Mia Creek which runs through the north/eastern end of the block. There are the remains of an old homestead near the creek and although the land has been used mostly for sheep growing in the later years, it is possible some vines were planted here in the late 1890s, early 1900s.

Mia Mia is about one hours drive from the Melbourne CBD, the most scenic route runs out by Melbourne Airport to Bulla, turning off to Romsey and Lancefield, and then joining the Burke & Wills Track directly over the range to Mia Mia.

Our vineyard philosophy is simple – to tend each vine individually, with every attention given to maximize the health of each vine, to keep the canopy open, use minimal or no sprays (possible because of the healthy westerly winds we often experience) and use organic fertilizers. The vines are each hand cane pruned and tied, they are also unirrigated. The fruit is hand picked to avoid the use of sulphur additions during fermentation.

The vineyards consist of about ¾ Shiraz vines and about ¼ Cabernet Sauvignon vines. The first wines were produced in 2002 and they showcase the distinctive flavours of our unique meso climate, elegant with beautiful fruits that linger on the palate.

The vineyard is tended by Norbert and his family, wife Pam and sons, Nicholas and Christopher, and also Doug, Norbert’s father-in-law who has been an invaluable wealth of knowledge when it comes to farming, having come from a lifetime of sheep & wheat farming in the Wimmera area of Victoria.

We of course cannot forget our vineyard dogs, Burga (short for Burgundy) & Shimmer, who are invaluable when it comes to chasing birds out of the vineyard, and are also tremendous company during the long hours of pruning and general maintenance of the vineyard. We were lucky enough to share the early years when selecting our vineyard site and establishing the vineyards with our other dog, Luta. He was a true vineyard dog and always knew when the grapes were ready to pick. Unfortunately we lost him due to vet negligence; Luta was buried at the foot of our first vineyard (Red Cloud Paddock) which is named after him and, in Oglala Sioux Indian, Makhpiua Luta translates to Red Cloud and we have now dedicated our Sparkling Shiraz, Red Cloud Sparkling Shiraz, to his memory.

In the winery everything is done by hand, first the picking, usually done by family and friends at a designated time which varies according to the season. This special day consists of an early start to picking followed by an ample lunch and relaxation, with a chance to sample the previous vintages and quite often dinner for those who cant tear themselves away from the winery, and of course the inevitable that a lot stay over night. Crushing is done as soon as possible, often with a lot of help from our fantastic neighbours, Grant & Wendy. During fermentation continuous gentle hand plunging takes place in open ferment bins. The wine is then basket pressed and kept in American & French Oak for a period of approximately 18 months.

From the 2007 Vintage Wines we will be releasing a Reserve Shiraz to add to our portfolio and in the future vintages we will release a Cabernet Sauvignon & a Fortified Wine.